Skip to content
21Jun 2017 by David Hancock No Comments 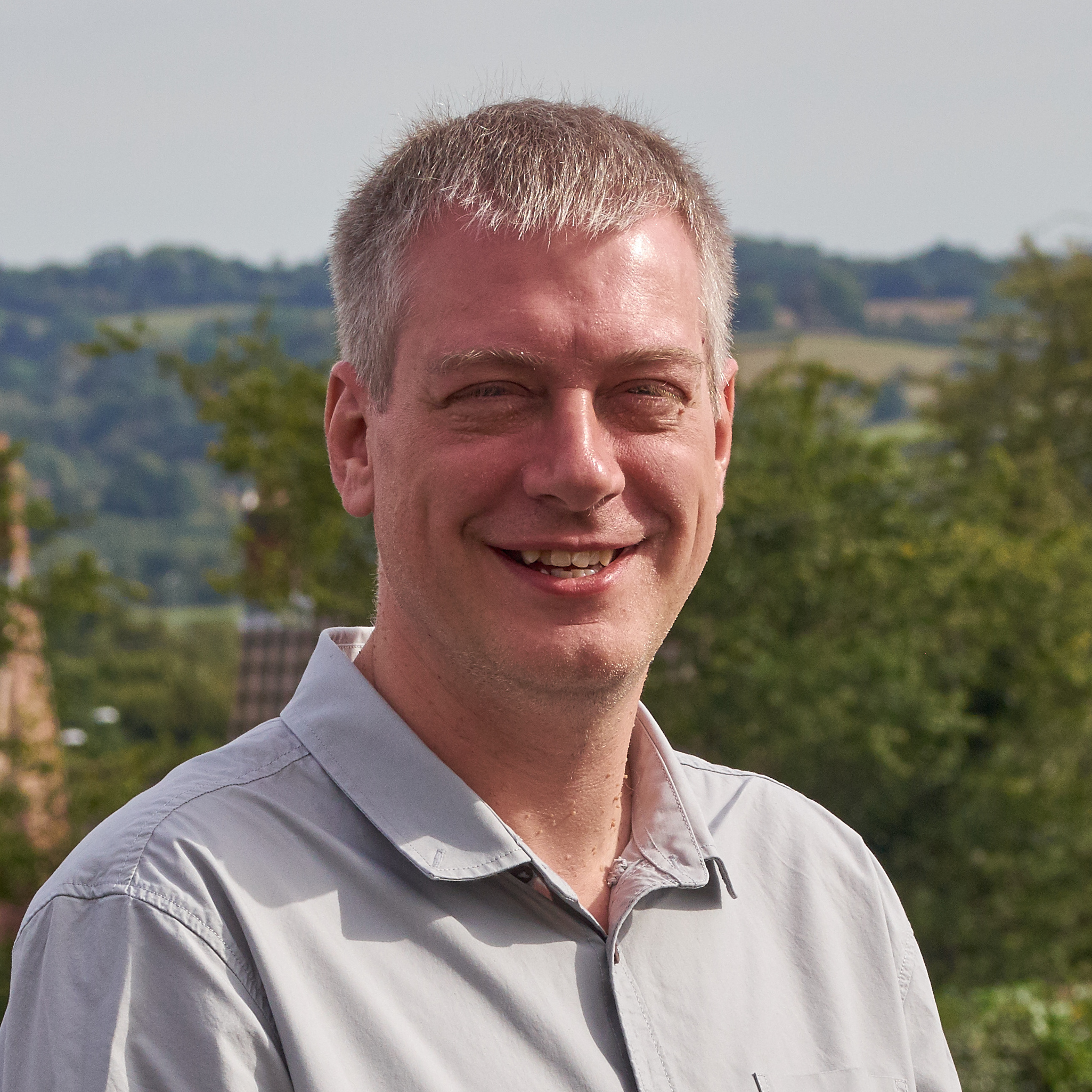 Many residents know that the Chair and myself regularly attend Parish Council and Community Group meetings around the districts we cover. We do this as we seek to represent those who would otherwise have no representation; and to scrutinise those making political decisions in councils run by a single political party, as is all too common in Bolsover and N-E Derbyshire.

Typically our presence is welcomed by most as a positive force; our contributions are valued and respected. South Normanton Parish Council, however, have continually attempted to block our presence and our ability to ask questions in the public interest.

Our Chair was formerly the Parish Clerk at South Normanton. Despite the Parish Council’s claims to the contrary, I have seen the email in which their instructed legal representative offered to pay him £10,000 – which one can only assume would be met by the tax payers of South Normanton – as part of a compromise agreement for him to leave his post and not ask any questions relating to matters he had witnessed during his employment with them. 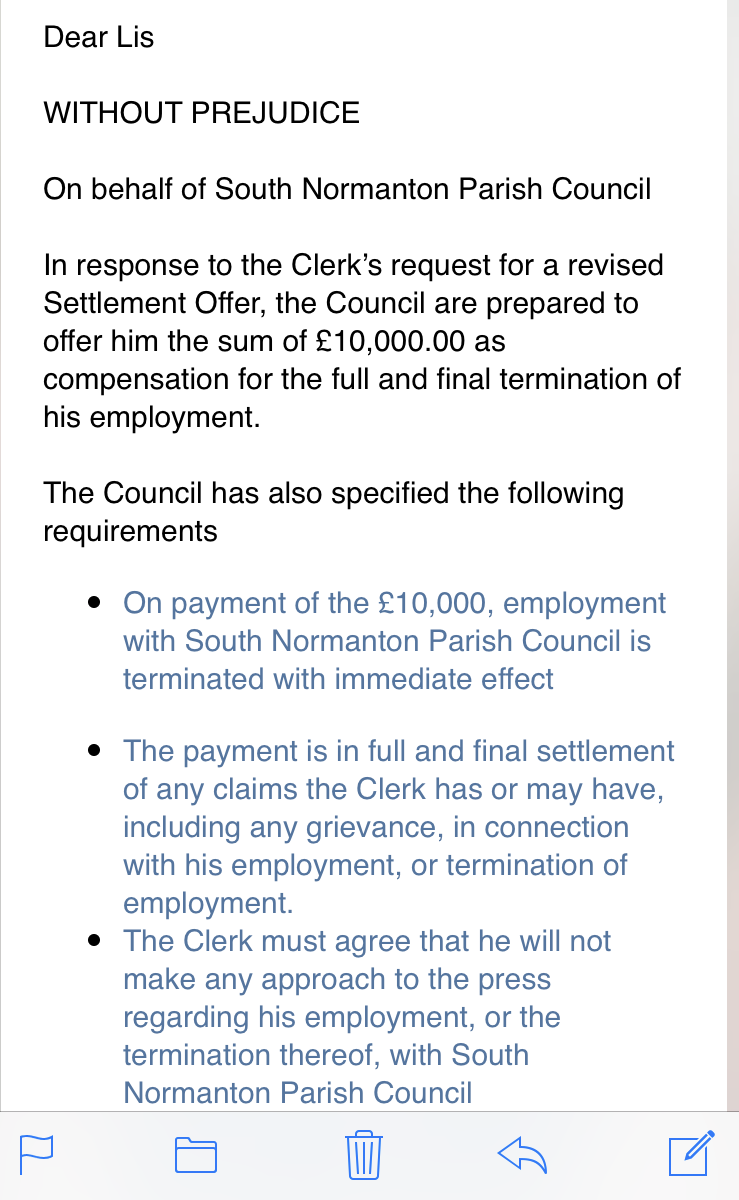 Our Chair rejected that offer and then resigned the post without financial inducement or any kind of gagging order. Indeed, legal action had to be threatened to force the Parish Council to pay his final salary.

In the past few weeks, one of South Normanton’s Parish Councillors, a Parish employee and an appointed sub-contractor have attempted to take spurious action against the Secretary. This matter is currently confidential as a counter-claim against those three individuals is being considered.

It is worth noting, at this juncture, that South Normanton Parish Councillor, Emma Stevenson, the newly appointed Parish Clerk, Karen Howe, and the sub-contracted financial administrator, Joanne Taylor, have long-standing friendships, which predate the appointment of both the Clerk and the Finance Administrator, by the Council’s HR Committee – of which Emma Stevenson is a member.

Then this week, our Chair received a somewhat threatening piece of correspondence from Quality Solicitors Chapman & Chubb full of fabrications and unspecified allegations which could result in injunctions and costs running into thousands of pounds – but which would all disappear if he stopped asking questions. 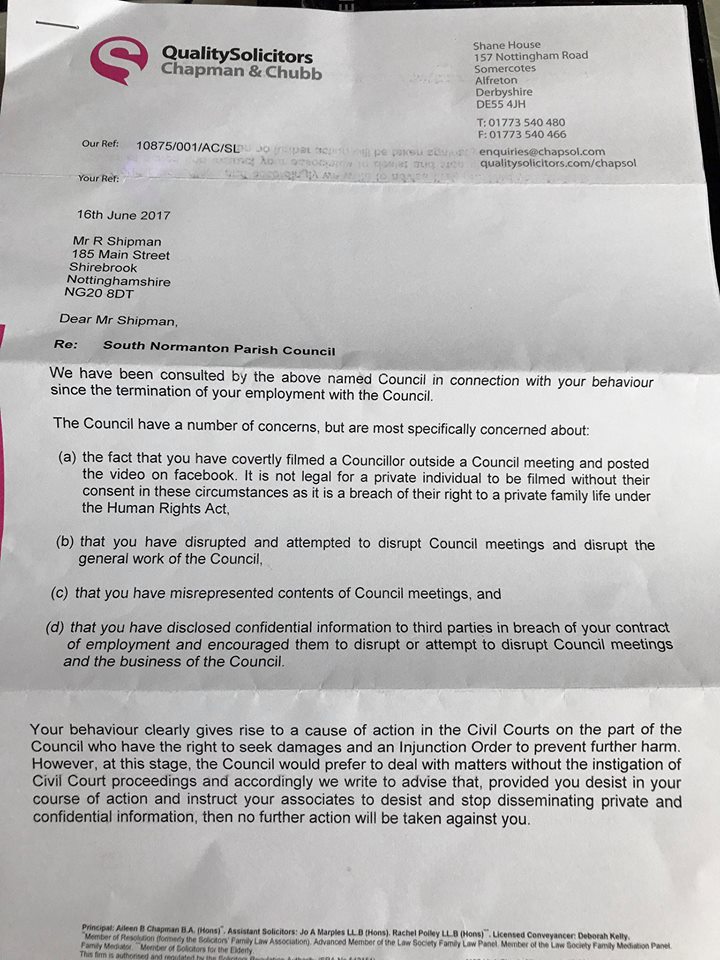 It is unclear why South Normanton Parish Council would choose such courses of action if they had nothing to hide, it is even less clear why they utilise the services of a family law solicitor (however, a quick search of their Twitter account reveals Quality Solicitors Chapman & Chubb to be followers of Derbyshire Labour Party); and Aileen Chapman, the author of the letter, has been witnessed attending a recent South Normanton Parish Council meeting.

The timing of the letter would appear to be significant. Ms Chapman was witnessed attending the South Normanton Parish Council in early May; however, her letter waited until this past week to be written. It is, of course, a criminal offence to publish untrue statements about a political candidate.

The actions of South Normanton Parish Council against the Chair and Secretary of N-E Derbyshire & Bolsover Liberal Democrats are not in the interest of the residents and businesses of South Normanton. They are a costly waste of Parish time and resources and would appear to be motivated by nothing more than an attempt to prevent legitimate democratic scrutiny. Again, we ask the obvious question – what exactly are you hiding? Certainly, the building up of their actions against us suggest that we are getting close to uncovering more than just their expending of tax-payers’ money on bar tabs!!!

Our formal concerns have been registered with the appropriate authorities; and we have submitted a Freedom of Information request to discover exactly how much of your money has been spent in attempting to prevent our scrutinising their decisions and activities.